do you know of any student groups debating this?  chris

a week before ending ant ipo - ma's speech had been covered as a great leap forward for the peoples money - a conversation ant ma and melinda gates have been brewing with guterres at un for over 2 years now
Jack Ma, Co-Founder of Alibaba Group, has seen the future: and it’s powered by digital currency. The owner of one of the largest tech companies in Asia used an opportunity at Bund Summit in Shanghai to extol the virtues of DeFi and predicted that, much like the smartphone was a giant leap for the mobile phone industry, digital currency will enable a new financial system, in both developing and developed economies, according to Bloomberg. “Digital currency could create value and we should think about how to establish a new type of financial system through digital currency,” he said.
from bloomberg
What you need to know:
How China Put the Brakes on Ant’s IPO
Markets

China’s richest man has been busy launching the world’s biggest IPO. He has been busy preparing for Alibaba Group Holding Ltd.’s grandest four-day Double Eleven shopping extravaganza. And yet two weeks ago, Ma somehow found the time to opine on China’s banking system at a high-profile financial forum in Shanghai, once again throwing himself into the eye of the storm.

In that speech, apart from labeling the global banking Basel Accords as an “old people’s club,” Ma said “systemic risk” is not the issue in China. Rather, China’s biggest risk is that it “lacks a financial ecosystem.” Chinese banks are like “pawn shops”, where collateral and guarantees are the hard currencies. As a result, some decided to go so big they are not allowed to fail. “As the Chinese like to say, if you borrow 100,000 yuan from the bank, you are a bit scared; if you borrow a million yuan, both you and the bank are a little nervous; but if you take a 1 billion yuan loan, you are not scared at all, the bank is,” Ma said.

The consequences came this week. On Monday, Beijing’s top financial watchdogs summoned Ma and dressed him down. Beijing also issued draft rules on online micro lending, stipulating stricter capital requirements and operational rules for some of Ant Group Co.’s consumer credit businesses. But the big shocker came on Tuesday night. The Shanghai Stock Exchange suspended Ant’s listing on its Star board, citing Monday's meeting and subsequent regulatory changes. Ant then said in a filing it would suspend its Hong Kong IPO as well. The fintech giant was scheduled to start trading on Thursday. The news sparked a slide in Alibaba shares on Tuesday in New York, while dragging down other Chinese companies’ U.S.-listed stocks.

What Ma said was a bit sensational, perhaps. But he was right. China’s bankers are so averse to extending credit to smaller borrowers that Beijing redefined “inclusive financing” to make its banks’ loan books look prettier. In fact, it’s been so difficult for small businesses to obtain bank credit in the last decade that they have become hard wired not to invest for the future. Here’s the latest tidbit of evidence: In the third quarter, even as China’s economy recovered and 86% of 300 smaller manufacturers CLSA spoke to became profitable, most remained wary. A record-breaking 59% of their capital expenses went into mere “regular maintenance,” the brokerage found.

Ma’s words were blunt, but these phrases, such as “pawn shops,” are not his concoctions. Bureaucrats at the People’s Bank of China, for instance, had used the same words themselves. So why is Ma being singled out?

Could it be that Ant is too profitable and is now being targeted? Ant is raising at least $34.5 billion in an IPO that attracted more than $3 trillion of retail orders. Meanwhile, regional banks are still in the doghouse, struggling and sometimes being restructured because they lack capital buffers.

In the fast-growing consumer credit business, Ant is essentially a matchmaker while banks lend and put aside cash in case some loans go sour. Fintech giants are making much more than lenders, city commercial banks complained to local media.

Ant’s vast consumer base appreciates its small loan offerings. But going forward, to appease its banks, Beijing may want to level the regulatory playing field. For instance, Ant may no longer operate just as a matchmaker and might be asked to keep 30% of the loans on its balance sheet, compared with only about 2% now. That should have been no problem because Ant’s IPO would have brought in billions of dollars of capital for loan provisions.

In its statement, the Shanghai exchange cited the changing regulatory landscape as one reason Ant no longer qualified for a listing. But in reality, nothing has changed. Since 2017, Beijing’s watchdogs have been debating whether to allow online micro lenders to take a simple loan facilitation model or require them to put away loan provisions. This new draft rule is just a continuation of the debate.

At the opening of his speech, Ma admitted he was conflicted as to whether to attend the forum and speak up. Now he probably regrets it. But here’s the thing: If China is serious about financial innovation, “inclusive financing” or the digital yuan, let the man who pioneered the business and made billions along the way share his experiences and thoughts. If Ma says systemic risk is not China’s Achilles’ heel, hear him out. He knows where the real problem is and could be part of the solution.

(Updates with Alibaba shares in the fourth paragraph. An earlier version was corrected to show China is averse to extending credit to smaller borrowers, not lenders, in the fifth paragraph.)
More from 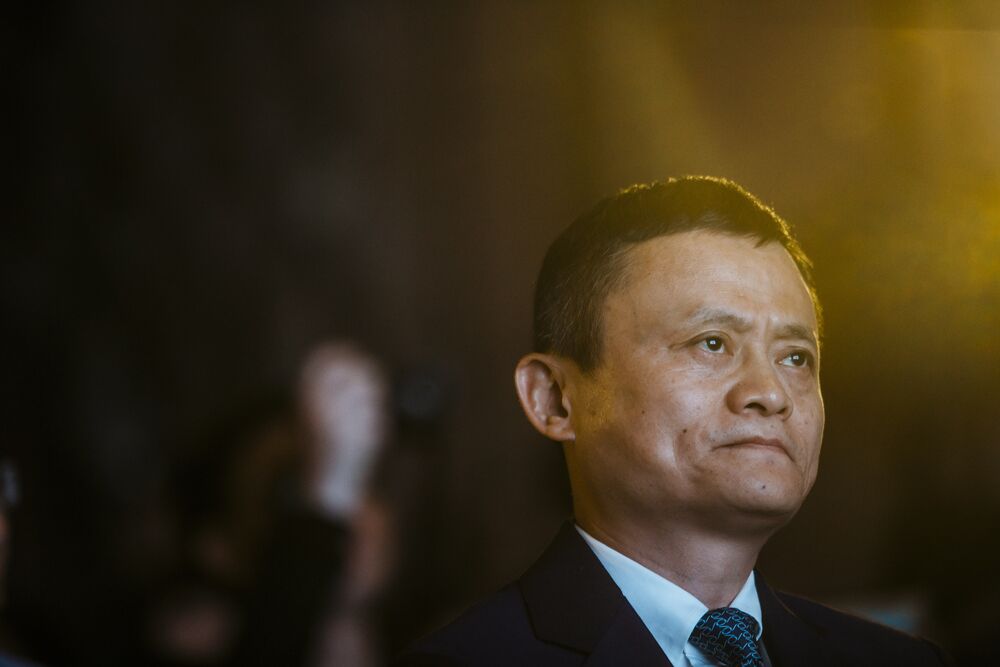 If Jack Ma says systemic risk is not China’s Achilles heel, hear him out. He could be part of the solution. Photographer: Anthony Kwan/Bloomberg
Shuli Ren is a Bloomberg Opinion columnist covering Asian markets. She previously wrote on markets for Barron's, following a career as an investment banker, and is a CFA charterholder.
Read more opinionFollow @shuli_ren on Twitter

Best Reason to Join a Startup? Not to Get Rich
Paying College Football Players Is Only Fair
E-Voting Is a Moonshot the U.S. Must Take
The Speech That Sunk the World's Biggest IPO

This column does not necessarily reflect the opinion of the editorial board or Bloomberg LP and its owners.

To contact the author of this story:
Shuli Ren at sren38@bloomberg.net

To contact the editor responsible for this story:
Beth Williams at bewilliams@bloomberg.net

Posted by chris macrae at 7:14 AM No comments: