SUMMARY OF OUR PREDICTIONS ON OPTIMISTIC SCENARIOS - WHAT ACTUALLY HAPPENED

IN OUR1970S ENTREPRENEURIALREVOLUTION.CITY SERIES POUBLISHED IN THE ECONOMIST WE HAD ARGUED FOR A SEA CHANGE IN PROFESSIONS SO THAT STARTUPS AND SME NETWORKS THRIVED AND BIG ORGANISATIONS FADED WITH END OF 20TH CENTURY; BODRES WOULD ALSO NEED TO BE SEEN AS SPACES WHERE GRREATEST RISKS COULD COMPOUND- NATURE DOESNT DESUIGN EVOLUTION RULES AROUND BODERS- INDEED AS EINSTEIN PROVED SHE ALWAYS MODELS SYSTEM INTERACTONS AT MORE MICRO LEVELS THAN MAN SCIEBNCE CAN ANALYSE- WHAT MAPMAKERS CALL THE HOLONIC QUAILTY OF SYSTEMS AND THE WAY THEY ARE ALWAYS SPIRALLING EXPOENTIALLY TO THRIVE OR DOWNWARDS TO COLLAPSE - REFER ALSO TP HG WELLS - CIVILISATION IS A RACE BETWEEN EDUCATION AND CATASTROPHE

WE PREDICTED 1984-1995 WOULD BE DECADE OF PERSONAL COMPUTER WEBBING- IN THE ECONOMIST 1984 WE PUBLISHED ONE LITMUST TEST OF SUSTAINALE LOCAL TO GLOBAL WOULD BE COST OF BASIC HEALTH FOR ALL WOULD COME DOWN AND DOW BOTH WITH TELEHEALTH, ADOLESCENT HEALTH BEING A PEER TO PERCURRICULUM- IN 1986 WE PUBLISHED ADAM SMITHS DEEPESTWARNING - THE STRUCTURE OF THE EMPIRES EDUCATION SYSTEM ASSUMES THAT LESS THAN 1% OF LIVES MATTER - THE MASTERS OF BUERUACRACY THAT THE PRE-TECH EMPIRE RELIED ON ALWAYS HOLDING ONE STANDARD VIEW- AS GANDHI SHOWED FROM 1906 THIS SYSTEM OF BOTH LEGISLATION AND EDUCATION WAS DESTROYING THE LIVELIHOODS OF THE TWO THIRDS OF HUMANS ON THE ASIAN CONTINENT INCLUGING THE QUARTER IN BRITISH INDIA THAT UNTIL INDEPENDENCE INCLUDED WHAT WAS THEN BORDERED OFF AS 2 PAKISTANS LATER THEEASTER ONE FREEING ITSELF TO BECOME BANGLADESH

WE HAD HOPED THAT COALITIONS OF PRIVATE, PUBLIC AND YOUTH NGO-SCHOOLS WOULD MAKE MILLENNIAL GOALS REAL PURPOSES NOT GREENWASHING

Posted by chris macrae at 1:47 PM No comments:

thanks for today's webinar

dad , norman macrae, spent his life working on how tech could reverse east-west inequalities spun during colonial age, ironically ever more so since in 1760s adam smith became first to think ahead of consequences of machines his co-worker james watt at glasgow u had started up

- dad had survived war as teenager navigating airplanes over modernday myanmar- he married the daughter of sir kemp the chief justice in mumbai concerned with 20 years of mediation with mahatma gandhi before sir kn's last project writing up legalese of india;'s independence-dad was in last class taught by keynes before his lifelong work at the economist

first dad's last research reached out to partners of sir fazle abed founder brac, bkash, brac uni bangladesh - its his models which sound like your view that some tech - perhaps big data health ai will be too important to be run by quarterly profits- i arranged 15 student exchanges to bangladesh between 2007 to 2018 partly because the systems reality of yunus and abed ere so different- i concluded it was sir fazle's curricula i personally wanted to write up

we also are working on arts and sports model that return the value to youth not the big administrators or brands- now is the right time to do that to the olympics, and thats dad's work which helped connect japan and british royal families as early as 1962 was rewarded at his retirement

there are a couple of people i would like to intro you to if you have time to see whether there are wins-wins between  approaches or if you prefer that one of your team members questions me in more detail ,all welcome

DEATH OF A GREAT OPTIMIST

When I joined the Economist in 1983, Norman Macrae was the deputy editor. He died last week at the age of 87. Soon after I joined the staff, a thing called a computer terminal appeared on my desk and my electric typewriter disappeared. Around that time, Norman wrote a long article that became a book about the future. It was one of the strangest things I had ever read.
It had boundless optimism --
Over the last decade, I have written many articles in The Economist and delivered lectures in nearly 30 countries across the world saying the future should be much more rosy. This book explores the lovely future people could have if only all democrats made the right decisions.
combined with a weird technological vision --
Eventually books, files, television programmes, computer information and telecommunications will merge. We'll have this portable object which is a television screen with first a typewriter, later a voice activator attached. Afterwards it will be minaturised so that your personal access instrument can be carried in your buttonhole, but there will be these cheap terminals around everywhere, more widely than telephones of 1984. The terminals will be used to access databases anywhere in the globe, and will become the brainworker's mobile place of work. Brainworkers, which will increasingly mean all workers, will be able to live in Tahiti if they want to and telecommute daily to the New York or Tokyo or Hamburg office through which they work. In the satellite age costs of transmission will not depend mainly on distance. And knowledge once digitalised can be replicated for use anywhere almost instantly.
and a startlingly fresh economic perspective --
In the 1890s around half of the workforce in countries like the United States were in three occupations: agriculture, domestic service and jobs to do with horse transport. By the 1970s these three were down to 4 per cent of the workforce. If this had been foretold in the 1890s, there would have been a wail. It would have been said that half the population was fit only to be farmworkers, parlourmaids and sweepers-up of horse manure. Where would this half find jobs? The answer was by the 1970s the majority of them were much more fully employed ( because more married women joined the workforce) doing jobs that would have sounded double-Dutch in the 1890s: extracting oil instead of fish out of the North Sea; working as computer programmers, or as television engineers, or as package-holiday tour operators chartering jet aircraft.

Posted by chris macrae at 10:34 AM No comments: 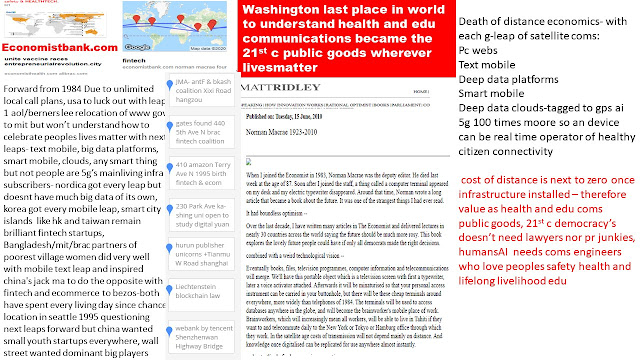 Posted by chris macrae at 7:40 AM No comments: